TravelAR Slovenia is an exciting Augmented Reality application for tourists visiting Slovenia who want to learn more about the highlights, history and cultural heritage of picturesque Slovene towns in an innovative way.
The TravelAR Slovenia application is the result of a community-driven co-creation project that combines education with creative production, and intersects on the fields of tourism and cultural heritage. The TravelAR app is ambitious in the sense that it aims to be the catalyst for the development of education in novel technologies, cultural heritage preservation, and tourism promotion on a local and regional level.
The driving force behind these developments is the community itself.
Participants in the TravelAR project learn how to create content using Maya 3d software, enabling them to reconstruct notable cultural heritage sites in their hometown, build interactive narratives, and contribute to an Augmented Reality app which promotes local and regional tourism. TravelAR is a concept that empowers these communities to initiate their own learning and co-creation projects using Augmented Reality technology and boosting local tourism, as well as contributing to the preservation of their (tangible and intangible) cultural heritage.

Read more about the application on the dedicated website:
http://www.travel-ar.si

TravelAR Slovenia in Kočevje and Črnomelj

The TravelAR Slovenia was launched in 2017 in Kočevje and consists of a trip through the history of  the Auersperg Castle, which used to dominate the centre of town, but was destroyed. A captivating AR-driven narrative brings the turbulent history of this formidable castle back to life. Users of the TravelAR application also have a unique AR historical photo opportunity. They can be eternalized ‘dressed’ as Auersperg nobility in an Augmented Reality replica of a genuine knight’s armor.
March 2018 saw the launch of the TravelAR Slovenia app on the Črnomelj location. Visitors of the picturesque town can now travel through time to explore Črnomelj as it was in the 17th century. On a central location in the town centre users of the TravelAR app can view and interact with a stylized AR maquette, which brings to life the towns historical highlights as detailed 3d models. Besides the Church of the Holy Spirit and the Church of Saint Peter, the former town walls and the castle have been reconstructed and regained their former grandeur. The app offers users more than just a view of the town. It provides detailed information about these cultural heritage spots in the form of a captivating narrative enriched with interactivity.
When users engage with the content they will get exclusive content about the sights in the form of fascinating one-of-a-kind historical pictures from the municipalities archive, and thoroughly researched information in the form of nicely stylized text.
The AR experiences differ per municipality, but do have in common that as many useful resources as possible in the form of (archival) imagery, 3d models, textual information and other materials are used in combination with a high level of interactivity. This way creating a truly immersive visitor experience with a high ‘Wow-factor’.

TravelAR Slovenia is a tourism booster

The relevance and urgency of adopting novel technologies to advance tourism and preserve cultural heritage in smaller towns and cities should not be underestimated. Nowadays tourists are more demanding. Instead of viewing something, taking a picture and continuing their journey, they want to truly experience something and expect content at almost every step. It is all about visitor and user experiences. New technology can be used to develop exactly such experiences. TravelAR does it with Augmented Reality. This novel technology is exciting, fresh and has a clear extra value when it comes to forming the visitors’ experience. It visualizes, contextualizes, adds playful educational elements and dynamics, which are all elements that engage, captivate and activate users.
An Augmented Reality-driven application is a long-lasting and future-proof solution that can replace the currently more common audio guides, as well as printed guides which do not offer the kind of interaction and immersive experience visitors demand.
Because at the end of the day visitors want a memorable experience, and creating long-lasting memories is what TravelAR is all about.

Cultural heritage can be tangible and intangible, and ranges from castles, industrial heritage, objects and monumental buildings to locations of historical events, stories, and people. Unfortunately, one of the problems a lot of municipalities deal with is a lack of resources to preserve or restore this cultural heritage. With TravelAR we try to bring those locations and stories back to life, and preserve them for future generations.
Physical cultural heritage preservation is stimulated during the course of the project by creating detailed 3d models of the ‘objects’ based on actual historical data. In this way future generations will always have access to a replica, even if the building or object concerned has disappeared.
The TravelAR project also saves intangible cultural heritage by making it part of the interactive narrative. Through interactive storytelling we can preserve and present these stories, songs and locations in an immersive and captivating way. By approaching it like a red thread, which guides visitors through the history of a town, and adding playful educational elements, this intangible heritage will be passed on to new generations.
Over the course of the next years the TravelAR project will continue to run and expand in both Črnomelj and Kočevje. Other locations in Slovenia will follow soon. 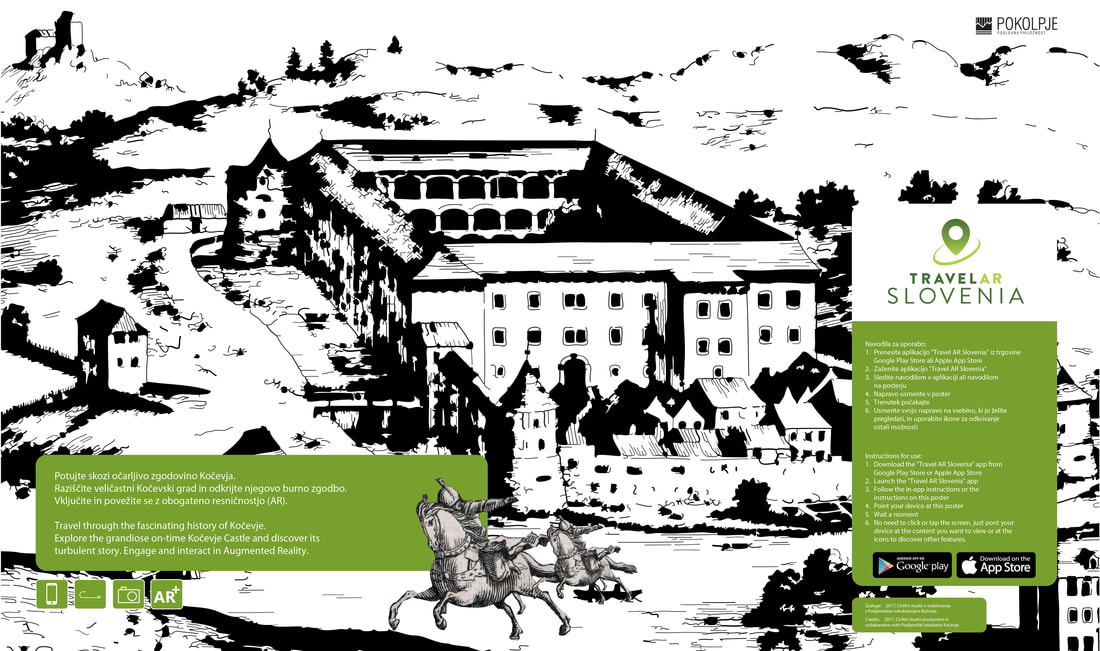 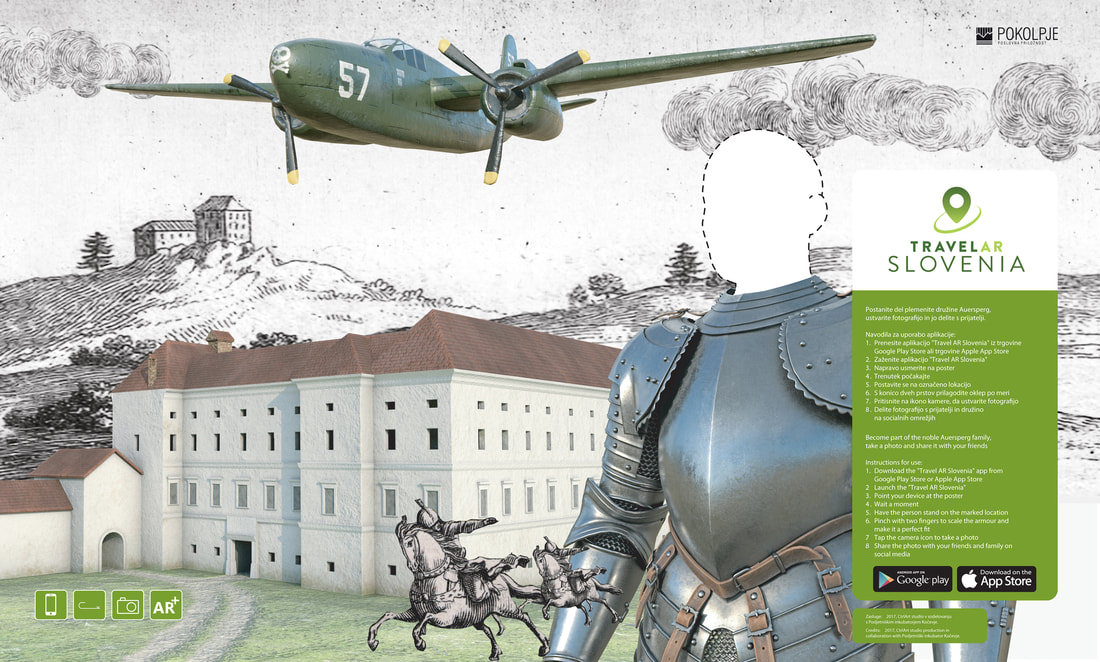 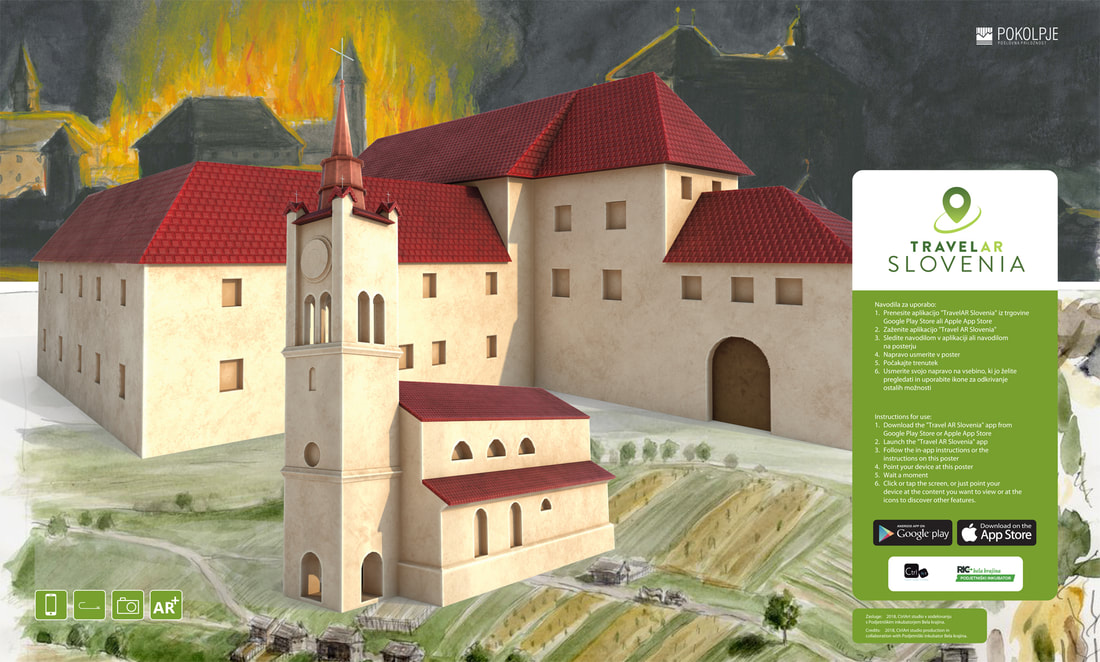